Why I wasn’t marching

I wish I supported a ‘people’s vote’. I really do. Life would be so much easier. I’d be on the same side as many of my friends. I’d have been marching through London for a ‘People’s Vote’. But I’m not. And I didn’t. I have respect for my marcher friends. In time I may even agree with them. But right now I don’t. And here’s why – three reasons. 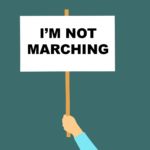 The first reason is that promises are promises. In 2016 the Government sent a leaflet to every household in the country saying: “This is your decision. The Government will implement what you decide.” For me, the imperative to keep that promise outweighs all the objections.

“David Cameron’s Tory government shouldn’t have made the promise.” Well they did. Her Majesty’s Government said the vote would count.

“52% is only 37% of all voters.” You can’t change the rules after the event. If we wanted a two-thirds majority we should have agreed that before the vote.

“It was advisory.” Technically – but people were told it would be implemented. No politician said it would be advisory before the referendum.

“Leavers have died and Remainers have reached voting age.” What does that mean? A new general election every time a certain number of people die?

“The Leavers lied and broke the law.” This is the strongest argument for me. But sadly it has been to the Court of Appeal and judicial review was refused.

“We need a referendum because most people don’t like the deal and Parliament can’t agree; the chaos means you have to go back to the people.” I agree that most MPs don’t like the deal. The public appear split – roughly a third for, a third against and a third ‘don’t knows’.[1] But it doesn’t inexorably follow that you then have to go back to a fresh vote, especially when Labour and Conservatives went into the 2017 election committed to respecting the result. . The public simply voted out, not any particular brand of out.   There may be a Parliamentary majority for a soft Brexit. Politicians just haven’t figured out how to demonstrate it. Next week, if Corbyn compromises with the likes of Letwin and Boles, they may.

“Brexit will be a disaster.” This is the weakest argument of all. It’s what we argued in 2016 and we lost.

All of these arguments are just that – arguments. And an argument can’t overturn a ballot. It needs to be legitimised by a judicial or Parliamentary decision. It may just be that Parliament supports a new referendum – if Labour whip MPs that way – a big ‘if’. That would provide legitimacy, but it would still amount to a small number of people over-ruling millions.

I agree with the person who said: “I do think it’s seriously disrespectful and politically utterly counterproductive to say: ‘sorry guys, you got it wrong, let’s try again’.” That was Vince Cable, the Liberal Democrat leader, speaking in 2016.  He’ll say that was then and this is a different vote, but it’s still an ‘in-or-out’ referendum for the second time in three years. I think it fails the duck test – ie walks like a duck, quacks like a duck, therefore is a duck.

And in fact, I think Cable’s line about a second vote being ‘politically counter-productive’ is more important long-term than the disrespect point.

The main reason I am heartbroken about the 2016 referendum is not that we are leaving the EU but that I live in a horribly divided country where 17 million people could vote for what I believe to be a toxic, nationalistic lie.  In essence, the lie is that the EU is the Fourth Reich when in fact it is the opposite, not one fascist nation but 28 democratic ones, not a super-state but a group of states, not an oppressor but a force for peace. It is a project that has stopped Europeans killing each other and brought them together in a single market of 500 million people with high standards of living.

I have thought a lot about how a majority of Britons could have ignored voices of experience from politics, business and academia who were explaining these points and chose instead to believe the alternative reality offered by the Mail, Sun, Express and social media.

And what I think is this. Brexit isn’t the root problem. And stopping Brexit won’t fix it. The big problem is that Britain is a bitterly divided country; divided between a contended group of ‘haves’ – typically graduates with good jobs and nice homes – and an angry, bitter, alienated class of ‘have-nots’ whose views have been shaped by decades of government neglect and media deceit. The UK has the fourth highest level of inequality in Europe. The top fifth earn 12 times what the bottom fifth earn.[2] Millions come from families where no-one goes to university or gets a well-paid job.  Working-class Britain sees middle-class Britain prospering, going on nice holidays, driving around in new cars – and it gets bloody angry.

Not only are the people at the bottom poor. They are also largely poorly educated – through no fault of their own. The establishment has failed to provide them with decent education or opportunities for generations. After the second world war, the Labour government ensured that the poorest in society had physical assets – homes and healthcare. But we never provided equality of opportunity. State schools have not been well resourced enough to overcome the lack of motivation or aspiration at home. Social background has remained the biggest factor in determining educational attainment.[3]

And we have not told people the truth. While Germany and other European countries taught their kids the horrific facts about the rise of Hitler and Holocaust, we taught our kids the myth that the British Empire was a good thing and that the Second World War was won by Britain without help from the US or the USSR – which lost 20 times as many fighters. And if you don’t tell people the truth, lies will fill the void. Along come the Sun, Mail and Cambridge Analytica to tell people that their problems are down to migrants and Brussels.

Leave campaign leader Dominic Cummings has said his team used a ‘baseball bat marked Turkey / NHS / £350m’.[4]  That meant suggesting 76 million Turks – Turkey’s entire population – were about to invade Britain. It meant claiming Britain gave £350m a week to the EU – when the actual figure is about £180m. And it meant saying Brexit was good for the NHS – when it means losing staff. In other words it was all tonk. But instead of focusing on nailing those lies,  what did the Remain campaign do to attract all those people who feel they can’t get any worse off? It told them they’d be worse off.

No wonder 70% of those with no qualifications voted leave while 70% of those with a degree voted remain.[5] But the result is a massive test of judgement for those well-educated Remainers. We can easily argue that we are seeking a second vote to save everyone, of all classes, from the damage Brexit will do to jobs and living standards. But there is something horribly patrician about telling less fortunate people you want to save them from their own decision. And there is something even more unsettling about middle-class self-interest – graduates, many of whom didn’t get involved in the original campaign in 2016, now trying to reverse the result because they want the EHIC card, an EU passport and the Erasmus programme.

The third reason I’m against another referendum is the result – either way. Remain is not a certainty and losing twice would be a catastrophe. Remainers currently lead in the polls but they did before 2016 and we should not underestimate the power of the forces that won then. But I worry more about winning. A big chunk of the electorate would be furious, with some justification, and the stage would be set for a right-wing demagogue to rouse the poorest against the rich. It’s been the strategy of every dictator from Mao to Milosevic to turn the working class against the middle class. Nigel Farage may look like a clown at this moment with his rag-tag bunch of marchers. But what if, say, 13 million people remain hard leavers who feel the old parties have betrayed them. That’s the number that voted for Labour in 1997 and the Tories in 2017. It only took two years for the old French parties to melt down and gift the top two places in the 2017 election to Macron and the National Front. And what happens here if there is no Macron equivalent? The new Independent Group of MPs has been getting airtime but Farage’s Brexit party is getting members – 100,000 he claims.

As Anand Menon, Director of The UK in a Changing Europe, puts it: “The divide in values in British society that burst into the open following the 2016 vote would remain entrenched, reinforcing the problems already faced by our party system in attempting to contain it.”

The problem is not the short-term one of the referendum result – and the solution is not to overturn it. The problem is the long-term one of failure to build a cohesive society and the solution involves a lot more than a referendum. It means redistribution of opportunity and a more educated society – investing to turn round sink estates and struggling schools, with better education and training to give people new life chances – including learning about government, politics and the EU.

In short, we should start doing the things we have failed to do over decades to put our society right, answering anger with opportunity and combating ignorance with truth.

Leaving the EU, if it happens, will hopefully show people the truth. Provided pro-Europeans aren’t as amateur in our communications as we were in 2016, people will see how deeply they were deceived. The power of the right-wing media deceit machine and demagogues like Farage will be broken and the road clear to become a mature democracy like Germany or the Nordic countries.

In time that will mean re-joining the EU – but as a natural consequence of having a more settled and informed democracy, rather than as the bitterly contested outcome of a vote in a society that remains dysfunctional.