For the country’s sake, Ed Davey has to be Liberal Democrat leader 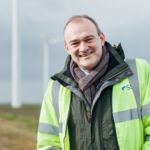 The contest for the Liberal Democrat leadership may not be setting the media on fire. As ever, they are focused on such vital questions as whether a minister wore a mask to a sandwich shop.

Meanwhile they’re missing the story that could well determine not just who runs the Lib Dems but who runs Britain after the next general election.

A leader for the country

The starting point for anyone on the progressive, non-Tory, side of politics surely has to be saving Britain from another full decade of Conservative rule.

People’s lives depend on it: the poor, the old, the underprivileged, the discriminated-against.

The environment depends on it. Scientists have told us we have until 2030 to halve carbon emissions to stop the worst impacts of climate change. How can Britain play its full part with Boris Johnson in charge?

Britain’s future in the world depends on it. Enough damage will be done by Brexit before the next general election, but imagine the erosion of our national influence continuing for a further five years.

Another Tory government would be a disaster. We must stop it at the 2024 election if there is no earlier opportunity. And as Lib Dems we need to choose the leader with the best chance of stopping it.

A leader for the job in hand

And in this mission, the Lib Dems have a very specific role to play. Labour are highly unlikely to win a majority alone.  Even with a more respected leader in Keir Starmer they will struggle to win back seats from the now established nationalists in Scotland. Convincing English ‘red wall’ voters that they have been conned is a big enough mountain to climb.

That leaves the Liberal Democrats to win back what we might call the ‘green field’ – the swathe of seats from Eastbourne to St Ives and Brecon to Dunbartonshire where the party came second in 2019 and voters swing from blue to gold.

The party’s challenge is to attract back the small business owner in Cheadle, the elderly couple who voted Leave in Guildford, the not-very-political young family in Cheltenham and the lawyer in Wimbledon.

If we’re serious about stopping the Tories ruling until 2029, we have to choose the leader with the best chance of winning over those former Conservative supporters. And I believe that person is Ed Davey, because of his experience as an MP, a minister and a campaigner, his proven competence and his record of public service.

A leader for today’s world

And winning over those former Tories is far from a done deal. Despite the coronavirus chaos, despite the failure to understand the Black Lives Matter protests, despite the rush towards the worst kind of Brexit, despite whatever horrors lie in wait, the political atmosphere in Britain has changed such that we can never assume voters will turn against the Tories in sufficient numbers.

The power of the right-wing propaganda machine that unites Johnson, Cummings and their cronies in the press and the darker elements of social media is so strong that people can be persuaded to vote on the basis of prejudices fed by lies rather than facts that are staring them in the face.

We live in a country where, for example, Nissan workers in Sunderland whose jobs depend on European exports can be persuaded to vote to leave the EU.

We live in a country with a toxic, archaic political culture, where many MPs and commentators behave like nineteenth century public schoolboys and politicians compete over how many push-ups they can do.

How we wish it were different. But it is what it is. Lib Dems have to win back support, not in the world we wish for, but the world we live in, a nasty political environment where decent people can get devoured. And until we clean it up, we need to choose a leader with long and proven experience in operating within that challenging environment. Ed Davey has that experience.

A leader for now, not then

Another relevant factor is that the voters we most need to attract in 2024 are not those who were the most sore when the Lib Dems went into coalition with the Conservatives in 2010. They are more likely to be people who once voted Tory but would support us now because we’re pro-European and have a leader with more integrity than Boris Johnson. Or they’re people who don’t follow politics closely, but dislike Johnson, realise Labour can’t win where they live and think our party and leader are ok to vote for. For some, having been in the coalition may even be a positive selling point.

So the coalition should not be a deal-breaker for many of our target voters, and neither should it be for members who opposed the coalition.

I opposed the coalition but I accept that others thought differently in good faith and that, in practice, the coalition delivered some important successes: the pupil premium, tax relief for low earners and, most relevant to the leadership, the stellar performance of Ed Davey as climate secretary.

I’m not sure that Davey’s achievements in this area are properly appreciated. He didn’t just throw subsidies at renewables, a policy which is easily reversed. Instead he deployed his skills as an economist as well as an environmentalist to take forward smart, pioneering policies such as auctions for offshore wind power that have made clean energy economically, as well as environmentally, sustainable. Davey’s £150bn package of proposals for a green recovery now shows the same ambition and insight. You don’t get many politicians who combine that level of technical expertise with the compassion and conviction Davey shows over social care and the NHS – which goes all the way back to being a young carer himself – and 20 years of getting things done for people as an MP.

In a different future, we can choose a different leader with a different set of skills and experiences. But right now, we need the leader who can best operate in today’s world and carry out today’s mission of winning back Tory voters. And that’s why we need to choose Ed Davey.

The writer is a former Liberal Democrat Parliamentary candidate who worked as press secretary for the late Lord Paddy Ashdown.