What happened at No 10 tonight? 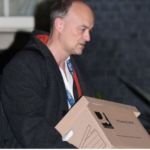 WTF happened at No 10? Two theories.

One. It’s just a personal thing. Carrie Symonds and Allegra Stratton tell Johnson to ditch the testosterone club of Cummings and Cain because they’re just poisonous.

Two, it’s Europe. We’re about to do a Canada deal. A Canada deal means British exporters have to meet EU standards. So we have to abide by all the rules the press took the mick out of for decades – square tomatoes, straight bananas etc – and led to people voting Brexit.

(BTW the rules are actually very sensible if you want to maintain standards across 500m people – and no the bananas didn’t have to be straight – see here if it still worries you.)

To distract attention from the Canada thing, Cummings has told the press to report that the sticking points on a trade deal are fish and subsidies. This can only last so long. Sooner or later Farage, Express, Telegraph and Tory gammons will realise we’re still bound by EU rules as far as EU-bound exports go and raise merry hell. So go for no deal.

Johnson and civil service say no deal will ramp up prices and cause all kinds of chaos, possibly including COVID-19 vaccine shortages.  Cummings says voters will believe they’re in heaven because we ‘took back control’ – even if the beer is dear. You can always persuade voters black is white if you lie well enough and long enough – just look at Trump.

Johnson says exactly Dominic – the door is in that direction.