10 reasons why Parliament isn’t the enemy 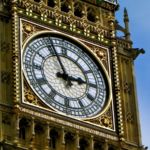 – MPs who have failed to deliver the will of the people, a Westminster elite of blockers and surrender monkeys.  Here are ten reasons not to fall for it.