Many people easily spot six or seven of the issues. But a few are not so obvious. 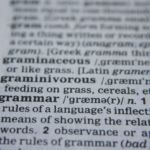 Here are the amended versions.

The evening is a chance to chat with like-minded people and local business’s businesses with no hard sell.

Plurals don’t need apostrophes. Also, plurals of words ending in ‘s’ usually have ‘es’ at the end, like kisses and buses.

We are the south wests South West’s premier tree-felling company.

Where do we start here? First, the South-West is a name for a geographical region and therefore it’s a ‘proper noun’, like the name of a town or a person, and proper nouns have capital letters. By the way, compass point words that are used just to indicate direction – “I’m heading north” – don’t have capitals. Second, this is a possessive word – it’s the premier tree felling company of the South West – and so we need an apostrophe.  Also, you can use a hyphen in South-West, but you don’t need one. Style guides differ on this so you can create your own convention.

Hi, I hope your you’re well.

‘Your’ is a possessive pronoun as in “I think this is your hat.”. ‘You’re’ is short for ‘you are’ and has an apostrophe in place of the missing ‘a’.

Our Beaujolais provides a great compliment complement to the vegetarian chilli.

A ‘compliment’ is an expression of praise, as in “That was a great article you wrote.”. A ‘complement’ is something that matches or goes well with something else.

Their There are over 50,000 employees in our firm.  There Their jobs cover a wide range from developers to marketing experts.

‘Their’ is a pronoun, the possessive form of ‘they’. ‘There’ is a pronoun used to introduce the subject of a sentence, as here, or an adverb used to denote location as in “She’s over there.”.

He runs a business which that provides apps for mobile phones and tablets.

Trickier for many people, this one. Not everyone gets taught about this at school and so many people use ‘that’ and ‘which’ interchangeably. However, there is a convention whereby ‘that’ is used for essential information and ‘which’ is for extra, non-essential, information as in “This is the house that Jack built, which is red.”. In other words, if you could leave out the ‘that’ or ‘which’ phrase and the sentence would still communicate the essential information, then it’s a ‘which’. If not, it’s a ‘that’.

Our aim is fault-free software and last year we had far less fewer bugs.

Use ‘less’ when talking about one thing and ‘fewer’ when referring to more than one, as in “I’d like less fish and fewer chips.”

Graduate trainees work in a range of different jobs, giving them a chance to practise their skills.

‘Practise’ is the verb. ‘Practice’ is the noun. The same principle applies to ‘license’ and ‘licence’ and to ‘advise’ and ‘advice’. I remember it by the fact that ‘is’ is a verb but ‘ice’ is a noun.

I am honoured to receive this award and I want to thank those who have most inspired me: my parents, Nelson Mandela, and Lady Gaga.

That added comma after Mandela is called the ‘Oxford comma’. Normally, you would write a list without a comma before the final ‘and’, as in: “My heroes include John Lennon, Marie Curie, Nelson Mandela and Lady Gaga.” .However, if that could create confusion, as here, where the last two items might be thought to be related to the one before, then the convention is to add that Oxford comma before the ‘and’.

I feel great because I got my hair cut and died dyed today.

What a difference a letter makes!

Does this stuff bore you rigid? Or do you love it?  If you love it, take a look at the BBC News style guide which is not a bad set of guidelines for the areas where usage varies.

PS Some may be wondering what governs the use of single ‘ or double quote marks – or inverted commas – above. There are no set conventions on this. Newspapers and publishers vary in their usage. The main thing is to choose your own convention and be consistent. My own preference is to use double quote marks for actual quotations or reported speech. For example, In 1963 Martin Luther King said: “I have a dream.”.  That leaves single quote marks for other uses, like quotes within other quotes or ‘highlighting’ to signal to the reader – as I just did there – that you’re calling particular attention to a word or phrase or using it in a new context.