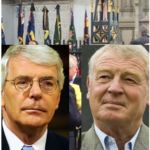 Twenty-five years ago, every Tuesday and Thursday morning, I would sit with Paddy Ashdown, Ming Campbell and various others to try to figure out a line that would floor John Major at Prime Minister’s Question Time.

Today, 25 years on from my time as Ashdown’s press secretary, I listened to Major deliver a stunning sensitive, comprehensive, witty and poignant eulogy at Ashdown’s memorial service in Westminster Abbey.

The two party leaders clashed repeatedly over economics, health, education and many other policies. After all, one had a Tory worldview, the other a Liberal one. But they had things in common beyond that.

They shared a silly sense of humour, laughing at one event I recall about Major’s goldfish getting sunstroke.

But they also shared bigger beliefs. They both believed Britain’s interests lay in being part of the EU – which had led to the LibDems choosing not to bring down the Major Government over the Maastricht Treaty – a big, bold, brave choice.

They were both internationalists who respected other cultures and traditions, as seen in the reading from the Koran today from the Grand Mufti of Bosnia-Herzegovina.

And more important, on a personal level, they were both robust but generous people whose life experiences enabled them to get along with world-leaders and normal folk alike. A different generation.

Hence the courageous and inspired decision to have Major deliver the eulogy to Ashdown today. And he did not disappoint.

Paddy always said Major had a ‘mind like a Singer sewing machine’. And today’s speech showed that he had known Paddy well in his last years and had done some incredibly detailed research.

He was able to tell us that that Paddy wasn’t keen on being called “grand-dad” and so invented a new name for his grand-children to call him – Fred.

He revealed that Ashdown had lately taken on a rescue dog which provided him with the excuse to walk to the pub in his Somerset village of Norton-sub-Hamdon, “sitting on the bench outside and talking to anyone who walked by”.

He’d also taken to gardening, with “vegetables planted like rows of Marines on parade.”  (OMG so true – I remember being shown how exactly to pack Paddy’s briefcase – others remember canvassing sessions that started with instructions to synchronise watches.)

He reminded us that when Ashdown heard that Serbian hitmen were being offered two million euros to kill him, his response was that he was worth far more than that.

That, when accused of being a careerist, Ashdown, who might have held high office in other parties, replied: “How can that be, I’m a Liberal Democrat”.

The resilience and humour all came back and the personal, inspirational message that counted today was Major’s remark that not a minute in Paddy’s life was wasted.    How we’d all wish that said of us.

The political message was that there is such a thing as the national interest. It transcends party politics. It springs from personal principles. It demands courage, creativity and openness. It’s about wisdom, far-sightedness and balance. Rare gifts.

One thing I will really remember about Paddy is that he never put anyone down. He once remonstrated with me when I criticised someone, saying that everyone had something to give.

For all his own achievements, abilities and confidence, whenever he met a new person, he took a genuine interest in them as a unique individual and wanted to know what they contributed to the world – which made them feel good about themselves and go away feeling happy.

A great example. Or, as Major put it today, “Your duty is done. At ease, Paddy, at ease.”